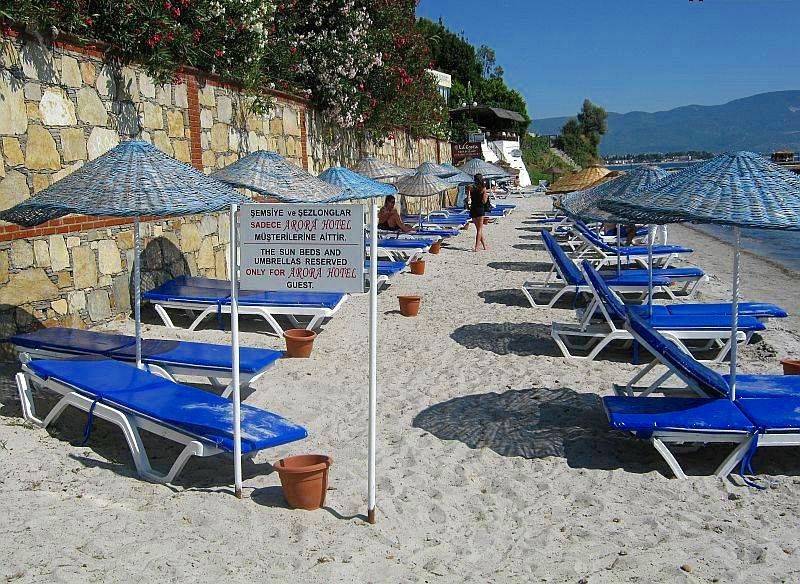 For my first visit in Turkey, my wife and I chose Arora Hotel, a 4 star all-inclusive resort in Kusadasi. The main factor for choosing it was its incredibly low price – but you always have to consider that you’re getting what you’re paying for.

So if you are curious to see if it is worth spending your time at Hotel Arora in Kusadasi, Turkey, read on this review. Have in mind that our original visit took place back in 2011, but the article was updated in 2019 with new data and impressions – because a lot has changed (and things are much better now).

The first impression that you get when entering the hotel is not that great: it seems to be a bit on the old and outdated side and the luxury or the wow factor that you could expect from 5 star resorts in Turkey is nowhere to be found here. Of course, this is a 4-star resort, so you shouldn’t compare it with the extravagance of 5-star Turkish resorts.

However, the personnel is always smiling and tries to be as helpful as possible, even though in most cases we’re talking about really young, untrained people (I guess that the waiters were as young as 16 or 17, all wearing pink t-shirts and shorts, therefore not looking very professional). However, they were all doing their best, even though many didn’t speak English at all.

We got a full sea-view room, and the view was indeed amazing: worth all the money just for that alone!

The room itself was big enough for two people who don’t actually need too much space and it was clean. The carpet was a bit too worn out and there was just one chair in the entire room, but since we’re not actually going on holiday to stay in the hotel room, it was OK.

Nothing fancy, but nothing to make us want change rooms or move elsewhere. It was clean, it had a great view and the beds were comfortable – and that’s all that matters, in the end.

The bathroom was small but again you don’t need much space there either. It was in a pretty good shape too and awaited us with a single pair of slippers, shower gel and shampoo (which where both refilled every three days or so) and there were no problems with the towels or the hot water.

All in all, your regular hotel room: not too shabby, but not “write home-amazing” either.

Pools and beach in Hotel Arora

Since our original visit, the pool-part of the hotel has changed a bit. Improved, I would say, as the pool is now larger and fancier and there’s a bit more space for the tourists.

However, the outside pool – the main one, which is where you will spend most of your time, probably – is still a bit too small for the number of tourists.

Also, there’s the annoying sunbed reservation problem: people still wake up early in the morning to place towels on the sunbeds in order to use them later on. Therefore, you will either have to do this yourself or risk not finding empty sunbeds (and definitely none in the best areas).

This was the main reason why we didn’t spend much time at the pool during our stay – even though once we got there at 9AM and were surprised to find two sunbeds available. We took them immediately, but that’s a rare occurrence.

I personally hate the people who reserve their sunbeds – arriving later at 10 or 11, not allowing the early birds like ourselves to enjoy the pool. I know that hotels don’t really want to upset the people doing it, but I would be more than happy if they really did something about this.

The beach is very, very small but kept clean and rarely overcrowded. There are sunbeds and umbrellas and the water is crystal clear, even though you will probably need watershoes because of the vegetation.

There are two big things that I didn’t like about Arora’s beach: there was no beach bar in the first place and in order to get there, you had to either go down a very steep road or through a nearby hotel (which, strangely, most people did).

But despite its small size, the beach is actually nice and cozy and gives you a great feeling to be there. Too bad that the water itself is not cleaned (or the vegetation grows too fast too be kept under control).

But it looks even more natural this way, which is a bonus. And you still have nice chunks of crystal clear water to enjoy.

This was, back in 2011, our first visit at an all-inclusive resort and we were a bit disappointed back then.

However, we later understood that the relatively low quality of food is understandable when you take the price into consideration. This is something that we didn’t do back then.

However, it’s impossible to pay 300 Euros for a week at a hotel and expect tons of the best food available to you at all times.

With these in mind, I have to say that food is always a delicate subject and personal opinion certainly matters a lot here. It’s a matter of taste and expectations, and you’ll always have people who are extremely satisfied and people who feel that the food and drinks are miserable.

Personally, I didn’t find the food too attractive: it was incredibly repetitive and basically breakfast and dinner were always the same thing – you had some choice, indeed, but eventually it became boring especially since there were just a few dishes that I found eatable.

Lunch was a bit better, having a wider array of food types to choose from, but don’t expect to get back with extra pounds following your visit to Arora in Kusadasi – which is never a bad thing, right?

One other problem with the food here is that you again had to be present to eat as soon as the time was right otherwise you ran the risk of not finding the good things.

Especially when it came to sweets, they did not tend to replace the ones that were finished. So the later you arrived, the less options you had for your meal.

The drinks were extremely limited. For an all inclusive resort, you would expect them to have some variety. Here, there was not much of a choice: the Turkish beer (Efes) which was probably halved with water, a traditional Raki which was the strong alcoholic drink, Turkish vodka and gin: these were the options when it came to alcoholic drinks and they usually finished them too very quick and never refilled until next day.

Juice was served from 2 liter bottles, glasses were all plastic and overall the feeling you had was that they were doing their best to offer the cheapest products available.

The staff here wasn’t particularly charming, especially the bartenders who almost ignored you and treated you rudely unless you tipped them (in that case, they became a different person and always took care of you).

This is something that we have often found, later on, at all inclusive hotels, even at hotels with more stars and more pretentious guests. But despite this, it’s still not a joy.

Personnel and entertainment in Hotel Arora

Unfortunately, the people who worked there barely spoke any English, but they did their best to be helpful and always had a smile on their face.

They do tend to get rude to single women, especially blond ones, but it apparently is a thing of the Turkish people and not necessarily of the Arora staff. So we were told – not sure if that is indeed the truth or not.

Entertainment is decent – far from being impressive, but at least the hotel tries to keep you entertained: every night we had a different show, including live music and a very impressive water ballet team and during the day there was music from the DJ.

No entertainment team, but the place was so small that there wasn’t much space to do stuff anyway. The animation teams are usually annoying in my opinion, so I wouldn’t consider them a loss.

All in all, you won’t go to Hotel Arora in Kusadasi for the entertainment value, but if you want something to do during the nights, you will surely have a thing or two to keep you busy. And, as it was in my case, things got better as more glasses of beer were consumed. Ooops!

The hotel is outside of Kusadasi (or at least pretty far from the City Center) but there’s a dolmus station (their bus) right across the street and they arrive every few minutes and for 2 Turkish lira (1 Euro), you can get to the city center in around 10 minutes.

Around the hotel, there’s not much to see or do. The hotel itself is rather small and surrounded by other hotels. There are no quality restaurants around and just a few shops within walking distance, but it might be best to visit the center of Kusadasi if you want to do some shopping.

You normally don’t need the restaurants, as the hotel’s all inclusive plan keeps you well fed throughout the day, so no loss here.

Hotel Arora is certainly not one of the best hotels in Kusadasi. However, the price you pay for an All Inclusive service there is extremely low so you can’t have huge demands from them either.

All in all, it is a good 4-star hotel, but I would personally never choose a 4-star again. Not in Turkey, with their impressive 5-stars available everywhere. But if you’re on a tight budget, this one will definitely do.

So while I would personally not return there, I do not regret my holiday at Hotel Arora! It was a great place for extra trips to various main attractions in Turkey – such as the amazing Pamukkale and it’s more impressive Pam Thermal Hotel.

Have you been to Kusadasi or stayed at hotel Arora? What did you think about it?